Some members will be familiar with the story of Argyle legend Jack Leslie, the first black footballer to be selected to play for England, but sadly his history and significant contribution have been largely overlooked by the City and most football historians. The club at least have now recognised Jack by naming a boardroom in the new Grandstand after him. A new campaign is now being launched in the near future to recognise his achievements on a local and national stage by raising funds for a statue outside Home Park.

Some PASALB members have been instrumental in setting up the campaign. PASALB as an organisation will be supporting the campaign , along with (we hope) other supporter’s associations. We will keep members updated, but for now please do check out the website www.jackleslie.co.uk and hit the SIGN UP button. Also our crowdfunder campaign is live and you can donate at https://www.crowdfunder.co.uk/jack-leslie-campaign

Please also let us know if you are interested in taking an active role in the campaign,joining the committee, or if you can suggest useful contacts who can help the campaign with organisation, fundraising or promotion (please contact via PASALB chair gregfoxsmith@msn.com) 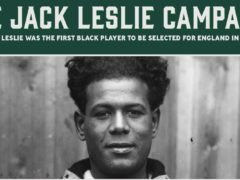