Your correspondent’s first season playing for PASALB, way back in 2005/06, yielded a derisory three wins over the course of the entire (Division 2!!) campaign. The class of 2015/16 exceeded that inglorious record with maximum efficiency, thanks to a 3-1 victory over AS Roma supporters in a quite extraordinary game on Sunday, moving us to 4 wins from our opening 4 fixtures.

Disco’s tireless foraging in search of loose balls has been one of the few constant features of the intervening decade, but this weekend was probably the first occasion on which he’s had to do so quite so literally. Neither side turned up with a match ball and we had to rummage around the bushes in the hope of finding one lost in a previous game.

Amazingly, Disco did indeed produce a high quality ball from out of the hedgerow and we were – belatedly – able to kick off. It quickly became apparent that our adversaries that afternoon included not just the Roman legionaries, but a strutting Caesar in the form of referee Baresh. Though probably incidental, his award of an early handball when Watkins clearly chested down a clearance was indicative of a completely deranged decision-making process. Moments later, he chose to ignore a blatant attempts to extricate the same player from his shirt – provided thanks to the generosity of RHP Pipeline Services Ltd – in the penalty area.

With little consistency coming from the official, several PASALB players including Langworth, Brown, Ranki, Prout and Disco took it upon themselves to lend him their advice. After ten minutes we were summoned in as a team and told that this was unwelcome, which was again frustrating as he didn’t feel the need to furnish his equally vocal critics on the Roma side with the same warning.

Nonetheless, we were enjoying the better of the early exchanges, and took a deserved lead when Hildyard picked the pocket of the Roma full back on the halfway line and scorched down the right flank, before cutting back to Disco from the byline. It took the efforts of both the keeper and the defender to keep out his cleanly struck effort, but the Roman Wall had been breached, and the barbarians, in the form of Tom Watkins, were at the gate. Our leading scorer pounced on to the rebound like a coiled viper onto a defenceless shrew, sending an emphatic header into the bottom corner.

At this stage it looked like the Chiswick colosseum was about to bear witness to the modern-day equivalent of Lions versus Christians rather than any kind of gladiatorial contest, but referee Baresh intervened once again to restore parity. A Roma striker went down in the penalty area and, whether or not there was contact, his twisting, contorting dive was surely too ludicrous to justify a penalty. But no, a spot kick was awarded. Goalkeeper Langworth downed his gloves in disgust and made for the touchline. After he had been coaxed back onto the field, he got a strong hand to the penalty but wasn’t quite able to keep it out.

Unsurprisingly, the game was becoming increasingly bad-tempered, but it was still a shock to see the mild-mannered Chantrell booked for asking whether or not a Roma player, who had already retired to the touchline for treatment on more than one occasion, was making one of his brief forays back into the action. We continued to dominate with several good moves down the left involving interplay from Lancaster, Chantrell, Prout, Watkins and Cassidy. The latter saw two ferociously struck free kicks saved by the admittedly excellent Roma keeper, who also produced a point blank save from Disco’s header.

Into the second half, and Mumford entered the fray on the hour mark in place of Disco. Were the Roma defenders unsettled by the mere presence of the marauding full back, or were they lulled into a false sense of security by Disco’s departure? Who knows, but the results were almost instant. A long-throw from Brown found Watkins lurking on the penalty spot and his textbook diving header crept into the bottom corner.

The taming of the Roman wolf was now underway in earnest and chances were coming as thick and fast as Atomic Kitten on Concorde. Chantrell sent a header narrowly over from a corner. Hildyard burst into the penalty area, demonstrating an aptitude for scattering Roman defences not seen since Hannibal’s elephants crossed the Alps, before being blocked by a last-ditch tackle. Braveheart won the ball in midfield and played in Watkins, whose screamer from the edge of the box was pushed away by the keeper, but Chantrell was on hand to slot into the unguarded net.

Roma’s decline and fall gathered pace from this point, with the first of two red cards awarded for repeated fouling. The second came on the final whistle – a robust challenge from Ranki in pursuit of a Cassidy corner prompted the second goalkeeper walk-out of the day, while the Roma captain exited involuntarily after a frank exchange of views with Baresh. The inauthoritative official chose to blow the full time whistle, rather than allow PASALB the pursuit of further goals against the 8 remaining Roma players

We move on to 6 points in the league while our newly-promoted opponents can draw solace from the example of certain major cities that weren’t built in a day. 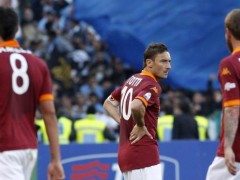