How important might this turn out to be? Ryan Brunt pounced in the fifth minute of injury time to give Argyle a deserved win at Kenilworth Road.

The Pilgrims were much the better side in the first half, but only had the one goal to show for it – a Carl McHugh header in the 15th minute.

Luton came into the game more in the second half, and they drew level in the 76th minute when Josh McQuoid headed home.

But Argyle regained the advantage after being helped by Ryan Hall’s dismissal for two bookable offences. 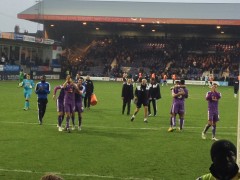