Argyle put their cup woes behind them to pick up their third consecutive League Two win and maintain their five-point lead at the top of the table.

First-half goals from Jake Jervis and Graham Carey were enough to see off the home side, who got a stoppage-time consolation through Ben Godfrey.

The game was particularly significant for Argyle goalkeeper James Bittner, who was making his first league start at the tender age of 33. 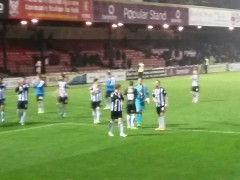