The PASALB AGM and social gathering will be on Thursday 7th June at 7.00pm at the Hoop and Grapes, Farringdon.

All PASALB members are welcome! And this year we have special guest Matt Tiller (musician, comedy genius and Argyle fan) joining us for a diverting evening. Read more about Matt below.

Please do join us even if not standing for a committee post- the formalities will conclude quickly leaving time to socialise.

with some committee members leaving we need people to replace them. PASALB runs football, pool and darts teams as well as arranging events like “Meet The Manager” and meeting pubs to watch televised Argyle games. If the committee is not replenished all of these activities will be in jeopardy because there are fewer people to keep things running so do please consider getting involved. The time commitment is small with very few formal meetings, and most discussions/ decisions taking place by e-mail.

The AGM traditionally sees the Treasurer in generous mood and there’ll be some beer and bowls of chips provided for those turning up, and of course a chance to talk Argyle after this exciting season. We also welcome ideas for PASALB activities next season.

And a special guest!

This year we have joining us at our AGM acclaimed London-based comedian who also happens to be a PASALB member- Matt Tiller.

Matt works at Comedy Central, blogs at www.matttiller.com, and tweets via @TillerPop. You can find him across most social media, and check out his music on spotify. We look forward to welcoming Matt, and all our members, on Thursday. 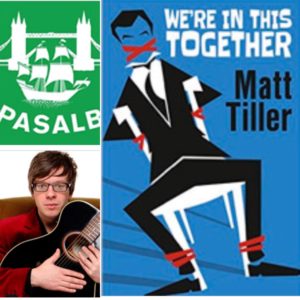 WE LOOK FORWARD TO SEEING YOU AT OUR AGM -ALL MEMBERS WELCOME!

– writes and performs personal, observational and political songs. Live shows blend musical one-liners, short and longer songs to create an experience that no one has described as magical, but some have begrudgingly described as, ‘quite funny.’

Much of his recent work has been produced by Augustin Bousfield of Gurgles and Mucky Sailor – bands oft played by Stuart Maconie on his Freakzone show. Matt’s A Short Album About Stuff has a smart indie feel with many comparing it to Jarvis Cocker. Well, two people have.

Matt’s controversial tune, We’re In This Together, garnered some great reviews with BBC 6Music’s Tom Robinson saying, ‘This track about kidnapping a senior politician is fun.’ Indie Band Guru wrote, ‘Looking away from the astounding melody and tune, the lyrics themselves are hysterical.’

Tiller’s favourite quote comes from Daniel, the nine year old son of a family friend. When Daniel told his grandmother they’d listened to singer-songwriter Matt Tiller on the journey to see her, she reacted, ‘Matt Tiller is not a singer-songwriter’ to which Daniel replied, ‘Yes he is, he’s just not very popular.’ 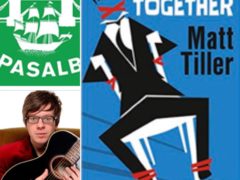