Former Argyle shot-stopper Steve Cherry will be the special guest at the PASALB Christmas Social.

The event will be held at the Hoop & Grapes pub in Farringdon on Thursday 15 December.

Cherry made 89 appearances for Argyle during two spells, and was between the sticks during the club’s Third Division Play-off Final victory over Darlington at Wembley in 1996. He was voted the club’s Player of the Year in 1988.

There will be a raffle and snacks. Please come along and enjoy a festive get-together with fellow members of the Green Army! 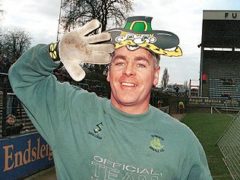